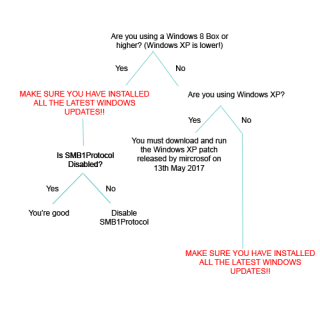 The hacker group that published the Wannacry exploit are threatening to release more spy tools from June onwards. What does this mean? Basically, this group stole these computer bugs from the US National Security Agency and released the ‘Eternal Blue’ computer exploit which was used to infect thousands of computers worldwide with the WannaCry virus. The bug that crippled NHS England last week.

It’s a scary thought that they know these supposedly top secret exploits and are threatening to sell them to the highest bidder. We already know how much damage the WannaCry virus caused and we now know how it used a Windows exploit to gain access to these machines. This virus is still a huge threat and all steps should be taken to ensure you are protected.